Sebastian Knapp played John the Apostle in The Bible miniseries.

As I was putting the finishing touches on Imagine, Part 2: No Religion, Too yesterday, I noticed another nifty parallel between the writings of John Lennon and the Apostle John:

John of Liverpool: I hope someday you’ll join us, and the world will be as one. – Imagine 3:3-4

(Jesus via) John of Patmos: ‘“My prayer is not for them alone. I pray also for those who will believe in me through their message, that all of them may be one, Father, just as you are in me and I am in you. May they also be in us so that the world may believe that you have sent me. I have given them the glory that you gave me, that they may be one as we are one — I in them and you in me—so that they may be brought to complete unity. Then the world will know that you sent me and have loved them even as you have loved me.’ – Jesus, a few hours before His crucifixion, in John 17:20-23 (emphasis added)

Lennon’s words, and his dream, are inspiring, without a doubt. And his assurance in the chorus that ‘You may say I’m a dreamer, but I’m not the only one’ is quite true. He’s also not the first one: 2,000 years ago, John the Apostle predicted the harmony Lennon imagined in 1971 and a few decades before the Apostle’s vision, Jesus Himself prayed for the unity Lennon would later dream about. 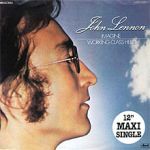 The cover of the Imagine single

Imagine is an absolute masterpiece of music, poetry and social expression, but I think it’s important to remember that the ideal it describes didn’t emerge in the 1960s, and you don’t need to set aside your faith in God in order to yearn for it.

As Ecclesiastes 1:9 says, ‘there is nothing new under the Sun’ – and in some cases this is because nothing new is needed. More often than not, previous generations can say, ‘We thought of that,’ frustrating as it is for their successors:

Now, am I saying this to pooh-pooh the originality of today’s thinkers, or to suggest that because there aren’t many ideas that haven’t been fully explored by previous generations, there’s no point in us exploring them? By no means!

If I thought of something clever on my own, the fact that someone else has already thought of it doesn’t diminish my own originality. It’s just an example of the ‘great minds think alike’ (or ‘fools seldom differ’) phenomenon at work.

And more importantly, I think there’s huge power in taking ownership of yesterday’s ideas by expressing them in terms that resonate right now. (I’d suggest that Christendom today is better at this than you might think.)

The point of this post – and the whole Imagine series, for that matter – is to:

Christ (played by Diogo Morgado in The Bible miniseries)

I want to throw a lifeline to my contemporaries who think they need to reinvent the wheel, spiritually speaking, because they think that what came before is irreparably irrelevant; people whose aversion to the church is rooted in perceptions that no longer apply; people whose distaste for Christianity (as they understand it) needlessly and tragically deprives them of connection with Christ.

The fact that Grannie’s church was boring, stuffy, uncomfortable and irrelevant doesn’t mean any of those words apply to the churches of today – and far more importantly and certainly – the God she worshiped there.

I’m here to tell you that Jesus Christ is the God of right now, and that right now, the church His followers founded 2,000 years ago is staggeringly broad and deep and diverse.

Jenny and Scotty double-dog dare you, too.

Somewhere within your grasp is a Trinitarian church, book or podcast (and I suspect all three) that has the potential to reveal Jesus to you in a way that your heart has ears to hear, and set you on the path to becoming who He made you to be – to begin to experience the abundant life Jesus promised in John 10:10. I think you owe it to yourself to go and find them.

And I double dog dare you to do yourself this favor.

Communications professional by day, amateur musician by night, worship leader (at Holy Trinity Anglican Church in Calgary) on weekends and aspiring Bible teacher in my dreams. Grateful husband to the woman who completes me. Doing-the-best-I-can dad to the son and daughter who keep me on my toes. Striving disciple of the GodMan who came, taught and died for me. Thanks for stopping by!
View all posts by robpetkau →
This entry was posted in Bible, Christian Walk, Christianity, Church, Community, False Prophets, Family, God, Gospel, Music, New Testament, Relationship, The Trinity, Words, Worship and tagged abundant life, be as one, Christendom, Church, diverse, double dog dare, dreamer, ecclesiastes 1:9, generation, generation gap, George orwell, imagine, irrelevant, john 10:10, john lennon, lifeline, liverpool, new age, new-age spirituality, no religion, not the only one, nothing new under the sun, orwell, patmos, pews, religion, right now, spiritual, spirituality, stuffy, too, Trinitarian, uncomfortable, winnie the pooh. Bookmark the permalink.