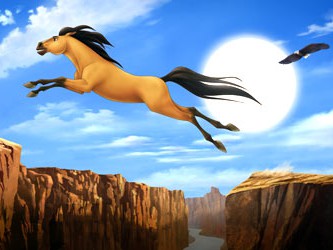 Spirit: Stallion of the Cimarron soars over a gorge like (and with) a bird.

Considering the significance and prominence of this word in the Bible, it’s a little surprising that I haven’t already explored this six-letter bombshell in the Words  series I began last January.

In hindsight, it seems a little backwards that Spirit is relegated to being The (Other) S-Word, with ‘sorry’ occupying the front seat.

Perhaps, considering the importance and weightiness of the word, it’s ridiculous and even a little alarming that an unschooled amateur like me would ever tackle a topic as daunting as the word ‘spirit’.

That’s probably at least partially why I’ve been sitting on the idea of a Spirit series for a few months now, and passing it over in favour of other subjects that made the to-do list much later, but were less intimidating. But when I came across this Sunday’s readings, as prescribed in the Revised Common Lectionary, I felt prompted to set aside my misgivings and start typing.

The word Spirit appears in three of the four readings this week, and is at least winked at in this week’s Psalm, so you could almost call tomorrow Spirit Sunday. What better time to explore the (Other) S-Word? 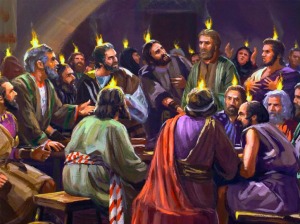 Conventional Christian wisdom says that the Holy Spirit came at Pentecost, which is true – kinda. I think it’s more accurate to suggest that the dramatic sound-of-wind, tongues-of-fire, birthday-of-the-church occasion was the day the Holy Spirit came to stay. Pentecost is the day the Spirit took up permanent residence in believers – but that doesn’t mean He wasn’t a regular visitor to, and participant in, their lives before that.

His real first appearance came long, long before Pentecost: in Verse 2 of the whole Bible (which, coincidentally, is included in one of tomorrow’s readings):

‘Now the earth was formless and empty, darkness was over the surface of the deep, and the Spirit of God was hovering over the waters.’ – Genesis 1:2 (NIV)

I looked this passage up in a couple of other translations, and most of them also use the word ‘hover’ here. But interestingly, there’s also some avian imagery at work. The Message says ‘God’s spirit brooded like a bird above the watery abyss.’ And Young’s Literal Translation says the Spirit of God was ‘fluttering on the face of the waters.’

That instantly reminds me of the baptism of Christ, where all four Gospels say that the Holy Spirit descended on Jesus like a dove:

‘Just as Jesus was coming up out of the water, he saw heaven being torn open and the Spirit descending on him like a dove.’ – Mark 1:10

That passage is also included in this Sunday’s Gospel reading, so it seems appropriate to spend a bit of time pondering the notion of Spirit-as-bird, which both of these readings seem to be pointing toward.

And I’m not entirely happy about it, to be honest. 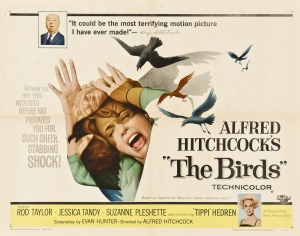 Not my favorite movie …

I’m a little ashamed to admit I have ornithophobia (fear of birds), so I’m not very comfortable thinking of the Spirit as a beak with wings. I’m much happier picturing Him as wind and fire – indomitable forces of nature that can be extremely helpful and life-giving, or terrifyingly destructive. I view wind and fire with a healthy mix of awe, fear, gratitude and admiration.

Birds, on the other hand, taste great when they’re decapitated, plucked and properly seasoned and cooked. But alive they freak me out. And not just because I’ve seen one too many Alfred Hitchcock movies.

Apparently, the seagulls in Finding Nemo aren’t the only ones who say, ‘Mine!’

I don’t really fear that crows will suddenly join forces and attack us, or even that a wayward gull will decide that my French fries (or my eyeballs) look pretty tasty and swoop in for a nibble (although even pondering either of these notions gives me serious heebie-jeebies).

No, the main reason I have a fowl opinion about birds is not the notion that they will harm me, but that these beautiful little creatures are much too powerful for their own good – they all too often harm themselves.

Sparrows and robins can flutter wherever they like. They can dip and dive with incredible ease, making impossibly quick turns in any direction as they seek prey or avoid predators. But one slight miscalculation, and kaplooey! they crash into a window and they’re goners.

I took this photo a couple of years ago, after an apparently filthy pigeon slammed into my office window. I think it came through the experience unscathed, but I can’t say for sure. Thankfully, I now work in a windowless cubicle.

I spent a couple of summers working as a groundskeeper in my early 20s, and cleaned up a lot of dead (and almost dead) songbirds that had crashed into windows in that time. And it occurred to me that these tiny creatures’ quarter-teaspoon-sized brains are not nearly large or sophisticated enough to be in charge of bodies capable of such speed, agility and altitude.

God, what were You thinking?!?

Birds caught in oil spills caused by humans would certainly have cause to ask God what He was thinking when He made us so smart, and yet so dumb.

(The ironic fact that pigeons and swallows would be quite justified in asking Him exactly the same question about why He chose to make humans so smart and yet so dumb, and then give us dominion over the planet is not at all lost on me, BTW.)

So birds freak me out. And therefore, the idea that the Holy Spirit might want to descend on me like a bird makes me pretty uncomfortable.

Now, as my friend and pastor – Stephen Hambidge – has said occasionally in his sermons, ‘God is much more interested in our character than in our comfort.’

But in John 14:26, the Holy Spirit is described specifically (in some translations) as the Comforter! How can He comfort me if He makes me so darn uncomfortable?

Hmmm. Maybe the Comforter‘s job is not to make us comfortable, but to provide comfort when we’re uncomfortable.

And if so, perhaps I need to let go of my need to be comfortable in an earthly sense before I can be comforted (helped, advocated for, interceded for, strengthened, instructed and taught, according to the way other versions of the Bible translate this word) in the way the Spirit has in mind for me.

And whether you are a fellow ornithophobe or not, I think maybe the same is true for you.