I’m not sure how I’d fare if I had to spend six hours in an unforgiving outdoor environment without food or water. But according to Matthew 4, Mark 1 and Luke 4, Jesus lasted six weeks under these conditions.

And what’s more, this physical endurathon wasn’t even the real test – more like stretching/warm-up time. The true test began at the end of the 40 days, when Jesus was at his weakest, and the devil slithered in and began to whisper in His ear. 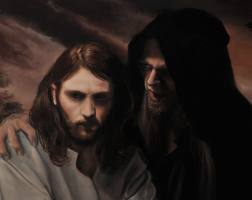 Jesus and Satan in the wilderness

First, he invited the starving Saviour to turn stones into bread so He could eat. The tempter also offered to make Jesus king of the whole world, if He, Jesus, would bow down and worship him, Satan. And he also double-dog dared Jesus to throw Himself off of a high place, so He could be rescued by angels, quoting Psalm 91:11-12.

Jesus passed all three tests, by quoting Scripture right back at Satan.

This is instructive in itself, as many a preacher has noted quite rightly. Learn your Bible, and memorize key verses, so when adversity darkens your path, God’s word can be ‘a lamp unto your feet and a light unto your path’ (Psalm 119:105 KJV).

Every line of each of the three accounts of Jesus’ tempting in the wilderness is worth looking at in-depth. But today, since we’re studying The T-Word, I want to focus on Jesus’ response to the third temptation (according to Luke).

Tormented by thirst, the people complained to Moses, ‘Why did you bring us out of Egypt,’ they said, ‘only to make us, our children, and our livestock, die of thirst?’ – Exodus 17:3

Jesus quotes Deuteronomy 6:16, which itself is a reference to Exodus 17:1-7. In this passage, the Israelites questioned whether God was really with them, because they ran out of water and were profoundly thirsty during their wilderness experience (I wonder why that particular episode was on Jesus’ mind…). They whined and nagged until God used Moses and his staff to call forth water from a rock.

“And he called the place Massah and Meribah because the Israelites quarreled and because they tested the Lord saying, “Is the Lord among us or not?” – Exodus 17:7

Some time later, in Deuteronomy 6:16, God reminds them of the incident, saying: “ Do not put the Lord your God to the test as you did at Massah.”

The entire Deuteronomy 6 chapter functions as an elaboration on the First Commandment, to help us put flesh on what ‘You shall have no other gods before me’ looks like, and Verse 16 here is extremely helpful in that regard. It may not be all that easy to obey, but it’s very simple to understand:

And after handing down this simple concept in the form of an ironclad rule, God never blinks on its enforcement. Right?

In Genesis 24:12-14, Abraham’s servant gives God a test of sorts, telling the Almighty how He should reveal who Isaac should marry. (OK, this happened long before Deuteronomy and even God can’t expect His commandments to be retroactive. But it’s still a pretty presumptuous way to deal with the Creator of the Universe … and God goes along with it!) 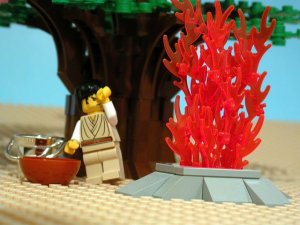 From Gideon Demands a Sign, a Brick Testament gallery

In Verses 17-22, Gideon doesn’t believe he’s actually talking to God (or His angel), so he asks the being he’s communicating with to wait while he prepares an offering, and then when he finally brings it back, and effectively challenges God to dazzle him.

God does not disappoint.

After telling Gideon to soak the meat and bread he’d brought with broth, one touch of the visitor’s staff bursts the whole offering into flame, and it’s consumed like newspaper soaked in gasoline.

Then, as if that wasn’t enough, Gideon tests God again in Verses 36-40, first by leaving a fleece outside all night and challenging God to put dew on the fleece but leave the ground dry – and then, because that’s apparently not an impressive enough miracle, he puts the fleece out again and asks God to make the fleece dry but the ground wet.

Each time, God does as He’s told, and complies with Gideon’s increasingly outrageous demands.

OK, so Abraham’s servant and Gideon got to test God, but they were just itty-bitty exceptions to an otherwise unbroken pattern of strict adherence to Deuteronomy 6:16, weren’t they? Everyone else has to toe the line on this, right?

But more on that tomorrow. For now…

1 Response to The T-Word, Part 4: When People Test God