Lent 2014 has passed much more quickly than I’m accustomed to, and I’m bragging, not complaining … I think.

You see, in my relatively short Christian life, I’ve found Lent to be pretty difficult. It’s tough for me to keep up the regimen of penitence and personal reflection for 40 days. I tend to run out of things to feel bad about, so I find myself going back to the top of the batting order and rehashing the whole list again.

And I used to think that’s what Lent was supposed to be like: Do you feel badly about how you’re falling short of living the abundant life Jesus bought for you with His blood? Not badly enough. Try again.

The Apple ][, on which many of us learned to write highly productive endless loop computer programs in BASIC.

Or for all of you BASIC nerds:

Last year, though, I tried something new. I made a point of thinking about God from a slightly different angle each day during Lent, and then blogging about it, in the 40 Simple Truths series. It was an extremely productive exercise for me. It was work, but it was enjoyable, life-giving work, and it helped me focus not on what I’m not, but on what God is. 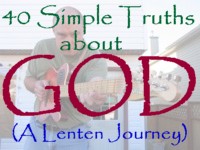 Lent 2013 unshackled me from my preconceived notions of what Lent was supposed to be like, so when the season began this year, I felt no particular need to overdo Lent. Instead, I decided to just do Lent.

Rather than blogging the hell out of the season like I did last year, my approach this year could be summed up thusly: Less Blog, More Dog. 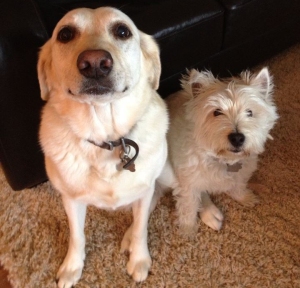 You see, I have two wonderful dogs who don’t get nearly enough exercise, because I’m ‘too busy’ to take them for walks more than once a month or so, I’m ashamed to admit. So after years of feeling badly about this but not doing anything about it, I decided to truly repent of this sin during Lent 2014, and take Jenny and Scotty for a walk every day from Ash Wednesday to Holy Saturday. I missed one day because I had the flu, and another because I was out of town, but otherwise, we did it. And they’re visibly happier and more at peace because of it (and I probably am, too).

And thanks to the fact that six weeks is enough time to establish a habit (it’s almost like God planned for the Lenten fast season to be this long, for exactly this reason), I think you’ll see Baldy and the Mutts traipsing around Coventry Hills a lot more regularly from now on.

During our walks, I brought along my iPhone and listened to worship music or sermons – so these walks were about G-O-D as well as being about d-o-g.

In addition, I decided to add a special Lenten devotional to my study time, and it’s been great! Lent for Everyone, available through the YouVersion iPhone Bible app, takes you through Matthew’s Gospel during the 40 days of Lent, with longer readings than most reading plans I’ve encountered, and much meatier devotional content than I’m used to. I highly recommend it for next year, if you’re looking for something.

Since the devotional was taking me through Matthew, I decided to work my way through the other Gospels in my earbuds, using YouVersion’s audio Bibles, during Lent. I’ve covered Mark, Luke and John two or three times each, since. Listening to the story all at once, and more than once in fairly rapid succession, has put the events in new lights for me, and you can probably look forward to more Gospel-focused Disciplehood entries in the weeks and months to come, as a result. (You’re welcome.)

So Lent this year has been productive for me, and it’s even been enjoyable.

But is that really a good thing?

I thought so, until I mistakenly said ‘Hallelujah!’ at the end of the service this past Sunday. (In my church, we avoid saying Hallelujah during Lent, so we can say it with extra gusto on Easter Sunday.) Was that momentary lapse indicative of the level to which I’m genuinely engaged with Lent this year? Even if you chalk it up to the force of habit, Lent is about breaking habits. If I can slip into auto pilot that easily, does that mean Lent doesn’t feel different enough to me to be making a real difference for me?

Have I been merely distracting myself with enjoyable Christian experiences this season so I can check the [Did something special for Lent] box, rather than doing the real work God wanted me to during this period?

If Lent was enjoyable, does that mean I did it wrong?

I don’t think so, but the question is worth asking.

But even if I did do it wrong, there’s not much point in worrying about it now. Whatever Lent is supposed to be about, the period of vague and nebulous brooding is over for this year. We’re about to begin the dynamic and extremely un-ambiguous sub-season known as Holy Week (still officially part of Lent, but a different phase to be sure).

And whether our Lent was productive or not – the way we wanted it to be, or the way God wanted it to be – we all have the same opportunity to make the most of Holy Week. 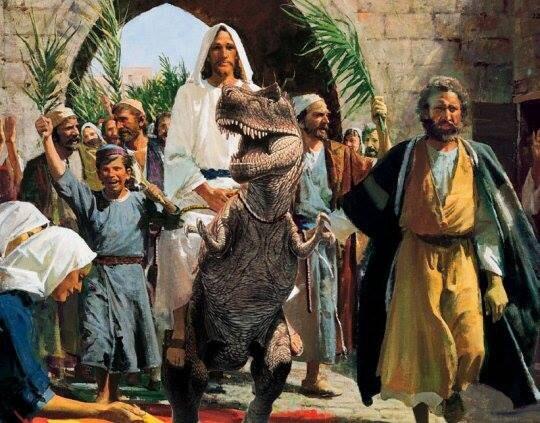 Happy Palm Sunday from Jurassic Park! (This photo serendipitously appeared on my Twitter feed on Friday.)

So on Palm Sunday, wave your palm leaves and say Hosanna! with gusto. On Maundy Thursday, be one of the disciples who’s dazed and confused by the events of the Last Supper, foot-washing and arrest. On Good Friday, wrestle with whether you’re a betrayer like Judas, a denier like Peter, an anguished but faithful follower like John, a deserter like the rest of the Twelve or even a member of the Crucify Him! choir (maybe all of the above, depending on the day). And on Easter Sunday, dare to believe anew, and shout, ‘Rabboni!’ with Mary Magdalene at the tomb. Doubt with Thomas in the Upper Room and receive Jesus’ loving rebuke. Have your eyes opened with Cleopas on the Road to Emmaus. Receive reinstatement with Peter during the Breakfast by the Sea.

Whether we made the most of the past 40 days or not, it’s my prayer and hope that we all enter Holy Week with reLentless enthusiasm.